From December 1st to 3rd 2023, the digital Youth Forest Policy Days took place. The event was organized by the International Forestry Students´ Association (IFSA). Within the three-day event, a wide variety of sessions were offered to forestry students from all over the world.

The first day was dedicated to various workshops. After the keynote speech (Salina Abraham, Regional Manager – GLF Africa Hub Global Landscapes Forum, CIFOR – ICRAF), the participants were invited to attend one of three workshops. The first workshop was held under the topic “Public speaking: how to prepare for it” and led by Mrs. Carla Brown (Siegwerk). The essence of this first workshop was to provide students with ways to evaluate their own presentations on a larger scale. The second session was titled “Designing an Engaging Conference 101.” This session provided information on how to adequately organize and run scientific conferences. The session was held by Eirini Sakellari (CIFOR) and Pe Magalhaes (ICRAF). 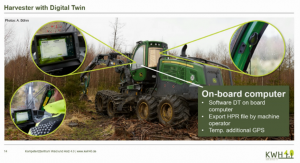 The Rosewood4.0 network participated in the event with a session on digitalization of forestry. The workshop was moderated by Thilo Wagner (principal of forest education center, Northrhine-Westfalian State Forest Service) and included four presentations. The first presentation was held by Mr. Frank Heinze (Coordinator “Competence Center Forest and Timber 4.0”) and gave insights in the infrastructure of digitalization of the forest sector. Afterwards, Mrs. Danijela Saric Bartolovic (Head of Department for Programmes and Projects, Competence Center Ltd.) presented the current state of digitalization of European forestry. The third presentation was held by Mr. Florian Hartsch (Researcher, Northrhine-Westfalian State Forest Service) and gave an overview on digital operator assistance and possibilities to optimize highly mechanized harvesting systems. Mr. Bertil Stapel (sales manager at treeva GmbH) highlighted potentials of forestry digitalization as a business chance for young companies.

After the first sessions, students were invited to participate in a Living Library. The Living Library method was aiming for an intensified dialogue between participants. In the afternoon, the three sessions mentioned above were repeated again to give students from all parts of the world the opportunity to participate.

After the workshops, students had the opportunity to meet other forestry students from around the world, as well as the speakers at the event, in a speed networking session. After the Closing Remarks (Johanna Klapper, IFSA) and another Living Library, the event was closed for the first day.

The Youth Forest Policy Days 2022 ended up with an interactive, role-playing game called “Climate Negotiation Solutions”, in which the participants had the possibility to act as representatives of governments, business and civil society. The goal was to work together to create a plan to limit global warming. Within a simulator, the students were able to test how their policy decisions affect global warming.